Lock Your Hatch-boards In Place 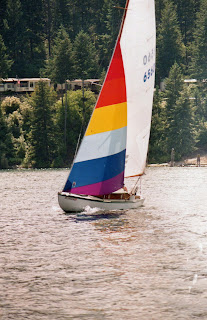 Does your boat have a method to lock your hatch-boards in place?  It is all too easy to find that your boat has been hit with a big gust of wind and is now heeling over so far that water is washing the windows and pouring over the coaming.  If your hatch is wide open, you risk swamping the cockpit and even sinking your boat while water pours over the coaming and through the open hatch.

An easy way to solve this is with locks on your hatch-boards. 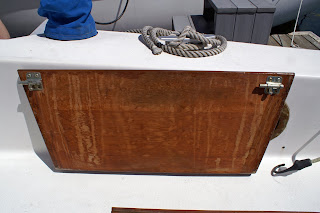 Putting barrel bolt locks on the upper corners of your hatch-boards will allow you to easily put the hatch-boards in and then simply lock them in place.  Easy because you have drilled holes in the hatch molding into which your barrel bolts fit. 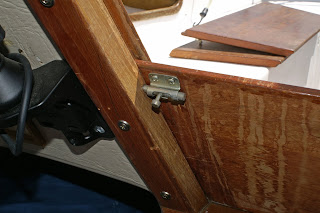 I have done this on my two lower hatch-boards.  And, yes, I do lock them in place if the weather is getting rough. 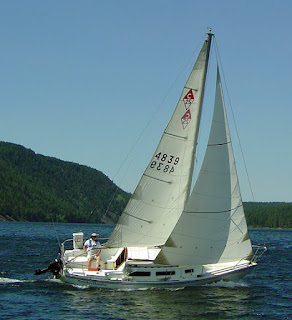 I am about ready to put them in right now!!!

Posted by Barnacle Bill Holcomb at 12:15 PM No comments: 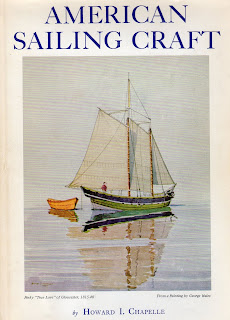 Back in the mid-70’s, my brother Bob and his wife, Fleeta, were spending the spring, summer and fall working in Ketchikan, AK and late fall, winter, and early spring in Spokane – working at the Red Barn Ski Shop – our family’s small business.

In Ketchikan, Bob was doing small boat repairs, rebuilds, and picking up odd jobs here and there.  In the evenings, he started lining off full sized plans for a 26-foot long Friendship Sloop.  Bob didn’t have a set of plans or study drawings to work from.  Rather, he had (and still has, as do I) a copy of Howard I. Chapelle’s book “American Sailing Craft”.  In this book is a chapter about Friendship Sloops and a line picture with a poorly printed offset gauge.  From this picture and the information accompanying the picture Bob lofted full-size plans on sheets of plywood that he laid down in a boatworks building he was renting.

By 1977, Bob was fully underway with the construction.  After the full-sized plans were made, Bob began constructing the keel, stem post and stern post (the backbone) of the boat.  Once these were constructed and fastened together, we used pipe rollers to move the assembly from the boatworks building to a boat-ways building next door and set the assembly up on the ways skid. 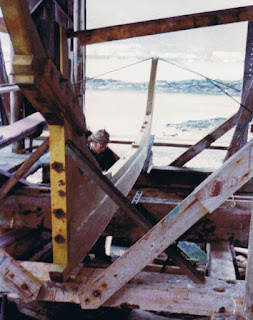 Bob constructed station molds and fastened them squarely across the keel and then used long 1” X 1.25” battens to give the overall shape of the hull.  Next came the transom.  If you look closely at the picture, you will see that the transom is both raked aft and curved.  And, after serious consideration and not being able to easily figure out how to frame this curved and raked piece, we decided to use several pieces of yellow cedar and make the transom essentially in one piece.  Yes, it is a bit heavier than a framed in and planked transom… but on the finished boat with several coats of varnish, this yellow cedar transom was just plain beautiful.  When the transom was complete and in place, Bob extended the battens all the way to the transom.  The boat was beginning to look like a boat. 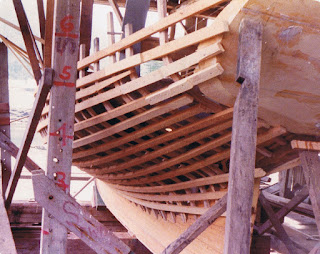 Now, we were ready to begin steaming the clear bending oak to make the ribs.  The steam box was about 40 feet away from where the boat was being built, so it was important to quickly move the steamed rib to the boat before the pliable nature of the steamed wood took a set.  We used “C” clamps to spring the steamed oak into place and drilled through the battens to secure the ribs in place. 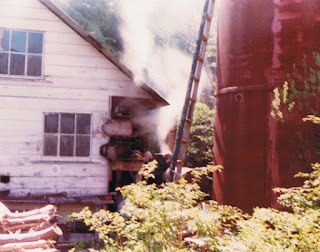 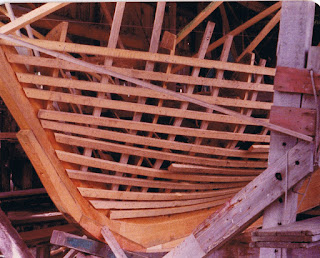 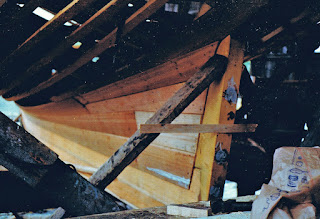 Sheer clamps, breast hook, diagonal stringers, and transom knees came next; followed by deck beams.  And now Bob began to plank the boat using red cedar logs he found float in the channel out in front of the boatworks.  A friend used his Volkswagen powered sawmill to cut planks from the logs.   Bob started at the deadwood on the keel and worked his way up.  The deck and cabin top was covered with plywood and then canvas that was saturated with paint was laid down.  Interior furniture was completed, hatch and hatch boards installed and the cockpit seats fitted.

Bob ordered sails (gaff mainsail, staysail, and jib).  A friend had found some spruce trees just the right size to fell and towed them to the boatworks.  Bob used these spruce logs for the mast, boom, gaff and bowsprit.  And, ordered the standing and running rigging. 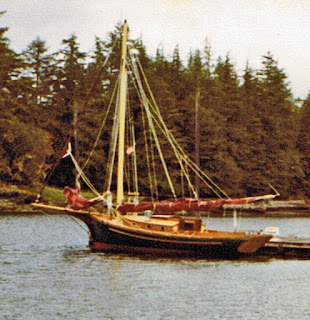 By early summer 1978 the boat was in the water… but floating very high on her lines.  You see, the Friendship Sloop was designed to have inside ballast.  Bob scrounged lead from everyone he could think of.  He had a pile of old lead batteries,  sheets of old lead donated by a friend.  Buckets of wheel weights.  And any other kind of lead he could find – including old bullets that the powder had been removed from.  He also bought several aluminum ice cube trays from the second hand store.

We had a big “cannery wok” that was about 5 feet across and 18 inches deep.  The fish canneries used molten lead solder to seal the cans full of salmon back in the 1930’s.  One relatively nice day (it was only sprinkling rain – not pouring down) we started a big fire on the beach and put the wok on the fire.  Next, we began placing the lead into the wok.  The lead melted at about 600 degrees and when it was all liquid, we used a ladle to get liquid led from the wok and pour the lead into the aluminum trays.  It only took a few minutes for the lead to solidify.  We turned the trays upside down and the lead ingots fell out.  Righting the trays we ladled more lead, and made more ingots.

Bob placed the lead ingots in the bilge of the Friendship Sloop until she road on her lines nicely.  Bob made a mooring out from shore where the boat stayed when not being sailed.

Bob decided to not put an inboard engine in the boat.  Instead, he fashioned an outboard bracket that fastened to the starboard side of the hull near the aft end of the cockpit.  On this he put a 5 hp outboard engine.  This was plenty enough to push the boat around marinas.  The only problem he had was that when he stopped the outboard, he had to replace the sparkplugs… otherwise, the engine would not start again.  He could use old plugs to replace other old plugs… but could not leave the plugs in from one start-up to the next.

One of the really neat things that Bob did to the interior was to buy and install a cast iron wood stove.  The stove was a Neptune 1 cast iron stove made especially for boats.  The oven was just big enough for Fleeta to put a loaf of bread in to bake. 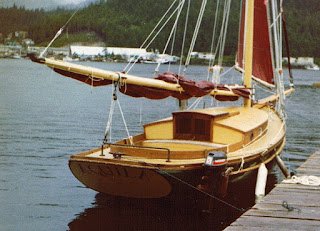 One day over the 4th of July week, my Dad, me, Bob, Fleeta, their son Josh and daughter Brenna sailed from Ketchikan around the south point of Pennock Island and on to Blank Inlet (about 8 or 10 miles).  On the way, I put out my salmon hook and caught a five pound silver.  When we got to the bay, Bob anchored and then put down his crab pot and we all rowed ashore in the dinghy.  We beach combed for a couple hours and then went back to check the crab pot.  There were a couple keepers.  We built a beach fire and boiled water in a big pot to cook the crabs, and fried the salmon in the big cast iron frying pan plus Nibblets corn cooked in its can (open of course).  In no time, we had about the best lunch imaginable.  We then rowed back to the Friendship, and weighed anchor… and sailed back to Ketchikan.  What a wonderful day.

With the boat completed, Bob, Fleeta and their son Josh sailed her from Ketchikan to Seattle down the inside passage in the summer of 1979.  This was “old-time” sailing; oil for lamps and running lights, no GPS, just charts and a compass.  No VHF radio, just a small transistor radio for getting weather reports.  No refrigerator or ice box for fresh food.  They anchored up each evening and beach combed for wood for the stove.  They were snug as bugs enjoying the wonderful adventure.

When the trip to Seattle was finished, the boat was moored on Lake Washington for several years and then Bob sold her.  Later, we found her at the Wooden Boat Foundation docks on Lake Union where she could be rented to individual Foundation members who had the requisite skills to sail her. 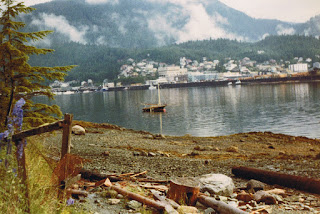 Posted by Barnacle Bill Holcomb at 4:46 PM No comments:

Barnacle Bill Holcomb
I started sailing when I was 16 years old and it has been a lifetime interest since then.